"The search for the hidden beauty in forms, volumes and colours has always been a constant in my life. Whenever a woman leaves my salon feeling beautiful, I feel happy" - Pier Giuseppe Moroni

Pier Giuseppe Moroni, Artistic Director for Wella Professional Italy, is considered to be amongst the best hairdressers in Italy. He starts working very young in his native Tuscany, specializing in the salons of the master Mario Stagi and alongside him, debuts in collaboration with leading international fashion magazines.

In 1986, he moves to Milan but in later years, the desire to explore and experiment leads him to live for long periods in Paris and New York. These are the years of special projects around the world, which further enrich his experience.

In 1994, the prestigious salon in the Milan city-centre, already a favoured site for a refined and international clientele takes his name. In 1998, it is completely redesigned in collaboration with architect Piero Lissoni.

In 1999, Pier Giuseppe begins painting following the urge to express shapes and colours even on canvas. In New York, the red flower symbol of his brand image and range of hair products is created.

In 2001, he is joined in the hair salon's work by the brother Duilio, his right hand man and partner. Alongside a team of specialised collaborators, he refines the Crochet cutting technique on dry hair, which enables giving shape and movement without cutting the length.

The strong point of Pier Giuseppe Moroni's work is the perfect synergy between cutting and technical services, made exclusively for each customer.

During his career, Pier Giuseppe has worked on advertising campaigns for brands such as: Dirk Bikkembergs, Etro, La Perla, Pomellato, Tod's and Trussardi. While, Albert Watson, Ellen Von Unverth, Giovanni Gastel, Michel Comte, Oliviero Toscani and Paolo Roversi are just some of great photographers he has had the privilege of working with.

"Beauty is never static but constantly changing. Movement is a fundamental part of my way of being: it's the spring that drives me each time to look for a particular feature in every woman, that particular detail that makes her unique every day and not just for a special occasion." - afferma Pier Giuseppe. 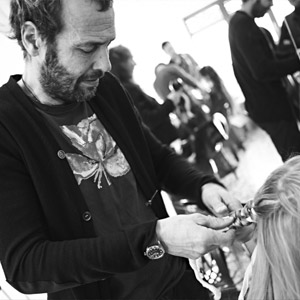